Welcome Day 8 of my blog-journal about my one-month trip to Japan in December. Although I was under the weather on Wednesday and Thursday, I was feeling well enough to go out again on Friday.

After taking some medicine from the local drug store, I was feeling better on Friday. My fiancé and I went back to Ikebukuro 池袋 again to get my hair cut and colored. We had an appointment to get wedding photos taken the following Monday, so I wanted to have a new cut and to refresh my hair color. I don’t normally dye my hair, but I wanted to enhance it for the photos, although I kept it pretty close to my natural color. My hair gets dull in the winter, but I didn’t want a drastic color change.

My fiancé has been going to Kawamura-san for haircuts since high school, when he did some hair modeling. Haircuts in Japan can be very expensive, but hair modeling can reduce the cost. You allow the hairdresser to give you a particular cut, and then to take photos of the haircut, and sometimes you can get it for free. Apparently, you can search online for places looking for haircut models. The downside is that you have to get the haircut they want you to model. You will know ahead of time, so if you don’t mind the cut you can get it for free, but if it’s not your style, you will have this cut until it grows out. But with cuts at typical salons costing between around $60-$100 (~￥6000-￥10,000), the discount is pretty nice.

Although my cut and color were around $100 (over ￥10,000) and took around 3 hours, it was still worth it. Not only did I get an absolutely perfect cut, but the shampoo, massage, color, and styling were all relaxing and well-done. I usually don’t like to get my haircut, but I enjoyed the massage and talking to Kawamura-san and to his assistant. They of course asked me the usual questions about my fiancé and I, my Japanese studies, my life in America, etc., but I got to ask them about their lives as well. I gave Kawamura-san a photo of the general idea of what I wanted, and then explained some of the finer details. As for the color, I asked his opinion, because hair dyes in Japan are made for Japanese hair and thus work differently on my brown, relatively thin hair. He picked out a color that matched my skin tone and was close to but richer than my natural hair color.

There were several other clients in the salon and two other hair dressers, plus two assistants. I’m used to having one person do everything from shampoo to blow-dry, but Kawamura-san only did the cut and assistants did the shampoo, color, and massage. Kawamura-san is an employee of the salon, but hopes to open his own salon one day. I wish I lived in Tokyo so he could be my hairdresser!

When I got my haircut in my hometown in Yamanashi prefecture years ago, it was a much smaller salon since it was in a rural area, but the hairdresser there was also excellent. I gave him a picture because I didn’t have the confidence to explain what I wanted, and he made it look awesome. The short cut looked like the photograph, but fit my hair type, which is naturally wavy, and everyone complimented me. The salon was owned by the hairdresser, and because it was his salon there were no assistants or other hairdressers, but he was very attentive. He didn’t make a lot of small talk, maybe because I was so shy and because I didn’t say a lot, or maybe because he thought I couldn’t speak Japanese very well (I was really nervous when I called to make an appointment too). It was only around ￥5000 (~$45), so cheaper than the Tokyo salons, but again worth it. This cut took around an hour and a half.

I’ve had hit-and-miss experiences in the US, with both local, smaller salons and with middle size and price salons. I’ve had hairdressers tell me that they just won’t give me the type of haircut I want, or just cut away without confirming that they were giving me the cut I wanted, but I’ve also had really excellent cuts. When I got my hair cut in Japan, I thought, oh of course this type of service is very Japanese. The attention to detail and customer care is pervasive in the service industry in Japan, where in certain situations in the US disgruntled employees might give you a bad experience. Stories of employees checking their phones and chewing gum while they work are met with gasps and looks of abhorrence by Japanese workers. That kind of thing would not be tolerated by management. So, even though there is no tip system in Japan, employees provide excellent service. I also think both of my hairdressers really love their jobs, and so they provide great service.

After my haircut, we were supposed to meet my fiancé’s teacher and his childhood friend at his old high school, then go out for dinner. School winter holidays in Japan do not center around Christmas as they do in the US, and so students were still in school. We popped into the halls and looked around at the classrooms, despite disapproving looks from the administrative staff offices. 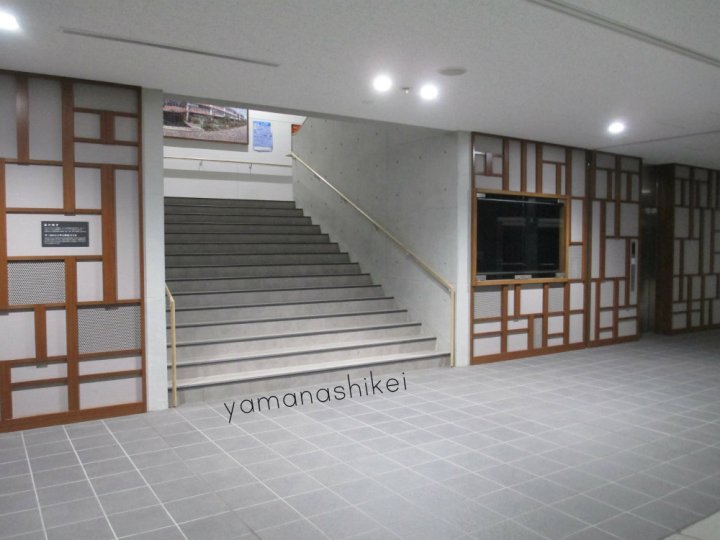 Hanging out in the halls of an empty high school on a Friday night in December…
it’s what all the cool kids do!
photo by kei

My fiancé went to a private school from elementary to university, which means that he didn’t have to take those horrible entrance exams you hear about in Japan. When he was about 4 or 5 years old he had to take an entrance exam to enter the private school, which meant waking up early and answering questions like what kind of animal is being talked about. He vaguely remembers something about a mouse, and being very sleepy and wanting to leave the exam. However, those few hours saved him from cram schools and endless hours of studying for entrance exams, so he really ought to be grateful for that mouse.

His childhood friend (whom I will call Jojo, after his love for the anime/manga Jojo’s Bizarre Adventure) went to the same high school, but was in public schools until then. He had to take entrance exams, and his high school entrance exam questions were likely harder than the elementary school questions about mice. Talking to my fiancé’s teacher, I learned that from an early age he tried to get away with not studying and sneaking off to buy ice cream. I’ve seen his university transcripts and snacking habits, and can confirm the truth behind this. However, Jojo was more studious and probably worked a lot harder since he had to experience the cram school and entrance exam system. Although from what I hear, he followed my fiancé’s escapades and got into his share of trouble as well. 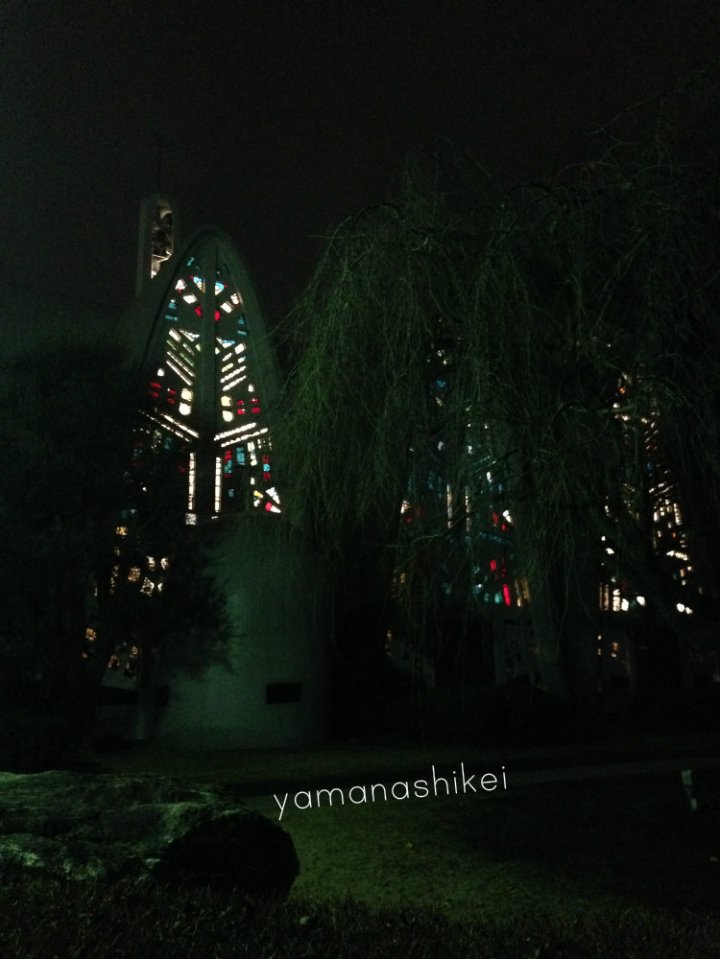 School chapel, because it’s a private Christian school.
Interestingly, my fiancé knows more about Christianity than about Shintoism.
photo by kei

We ate at a traditional type of Japanese restaurant where you remove your shoes and put them in small lockers, and sit with your feet dangling into a recess under the table on those small square cushions. There is usually a call button for the waitstaff, and sliding doors (shouji 障子) to close off the room from the foot paths outside the rooms. I didn’t take many photos because I was busy trying to order food and drinks for everyone, and listen to stories about my fiancé’s past.

It’s always interesting to hear stories about your significant other from before you met them, especially from people who knew them well. When Jojo and my fiancé went off to have “boys talk,” I took the opportunity to ask his teacher about Aki’s behavior in school. I already knew most of the trouble he had gotten into, but I was glad to hear the good things about his personality as well. I’m a studious person who has always enjoyed school, whereas he is the exact opposite. He studies when he must, but he doesn’t enjoy it. I never got into trouble, but it seems like he enjoyed creating trouble. Well, opposites attract, right?

I did not take photos of the restaurant, but I did take this photograph of eggplant (nasu 茄子)
I really like nasu!
photo by kei

I personally think getting a haircut is an experience I’d rather not have, but since I have no talent to cut my own hair, I must go to a hairdresser. Once I get to the salon, I quite enjoy them in Japan. Now that I’m more selective about the salons I go to in the US, I have more positive experiences than bad ones, but I still prefer Japanese salons. I’ve never been a hair model though!

Thanks as always for reading! Saturday (December 13th) was my study abroad class reunion, so look for a blog about that soon!

Next Up: Japan Diaries Day 9 – My University Reunion