After my university reunion in Shinjuku on Saturday and then just hanging out at my fiancé’s parents’ house on Sunday, on Monday we had the fitting for our pre-wedding photo session to attend in Tokyo.

I’ve always wanted to wear a kimono, and although I have a yukata (the lighter, summer type of garment), kimono are very expensive. Ever since my fiancé proposed, I’d decided to get wedding photos done in Japan wearing both a kimono and a western style wedding dress. Once I made plans to visit him for a month in December, I decided it was the perfect time to take those photos. Often, Japanese couples take photographs at studios prior to the wedding so that they have photos to display at the wedding, often in a big poster format displayed at the entrance to the wedding hall.

His parents were paying for the photos as a wedding gift, so I left it up to them to pick the studio. They decided on a studio called Watabe Wedding, which is in Tokyo. In preparation for the photo session, we had to pick out our outfits. There are various photo plans available, and I picked the three-outfit photo plan. The outfits are rented from the studio, and they have a wide selection available. 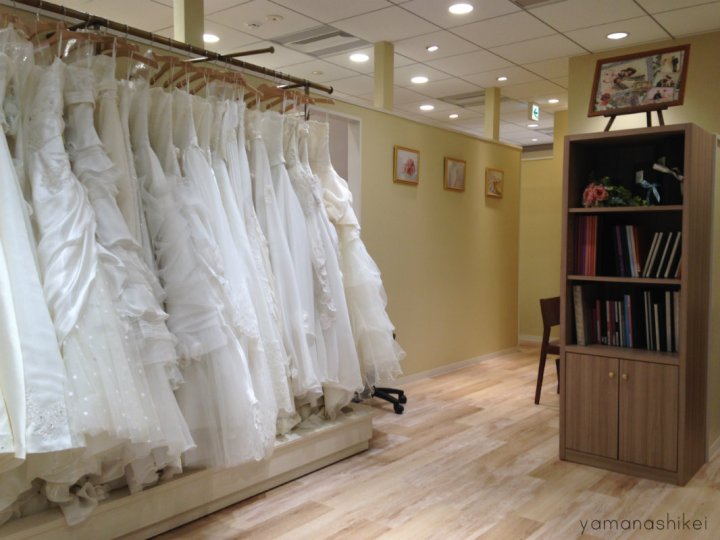 Often in Western-style Japanese weddings, and now commonly in American weddings, you will wear two dresses – one at your ceremony and a different one at your reception. The ceremony dress is usually the traditional white dress. It’s common to wear something called a color dress (カーラードレス) at your reception, which is a big fluffy dress in a color of your choice. The studio had a really nice selection of Western-style white dresses, color dresses, and kimono. 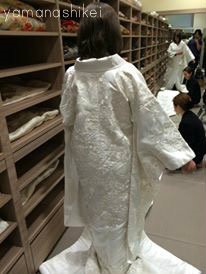 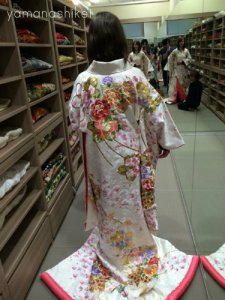 My fiancé’s mother came with us, mainly to help me pick out a wedding dress. Since my fiance isn’t very good at giving me any real advice on clothing (he pretty much says anything looks good, whether or not it actually does), I wanted a real second opinion. For the wedding dress, I wanted something very simple and plain with a fluffy skirt part, but my future mother-in-law suggested that I get something a little more decorated so that it would show up better in the photographs. I ended up picking out a strapless dress that was still simple and fluffy on the bottom, but that had an embroidered bodice.

As far as my fiancé’s attire, Japanese men wear a traditional black and white kimono for the traditional attire. The family crest (家紋 kamon) is worn on the shoulders and sleeves, and since the studio has a generic crest we got fabric stickers with Aki’s family crest to place over the generic one.

For Western attire, the studio had black, white, and grey/silver suits available. Although the white suited Aki well, I decided that the more traditional black suit was the style I was going for. 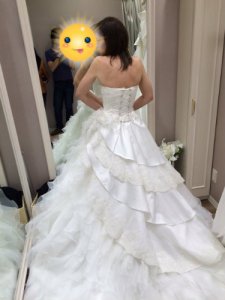 With our preparations for the photography package complete and our outfits selected, we just had to wait for the actual photography session on Friday. The studio provides the majority of the clothing and shoes, but the customer is responsible for bringing undergarments. They also have tabi (traditional Japanese socks with the big toe separate, but the rest of the toes together) for purchase at a reasonable price.

We decided on the 20-photo plan, which, combined with the studio time and outfit rental, came out to just over ￥200,000 (~$2,000). Included in the plan is an album of the 20 photos plus digital copies of the photos to use as we wish.

Our reservation for studio time for the photography session was on Friday, but first we had plans to spend the next three days in Hakone on a honeymoon as another gift from Aki’s parents!