Finally, New Year’s Day 2015 in Japan had arrived! My fiance and I spent the New Year with his family because in Japan New Year is a family-oriented holiday.

One Japanese New Year’s Eve tradition is a TV broadcast of Kouhaku Uta Gassen (紅白歌合戦), or “Red and White Song Battle,” an NHK broadcast where the most famous artists of the year are invited to a singing competition. They are divided into 2 groups, red (all female artists) and white (all male artists), and they perform in full costume with live singing. At the end, a panel of judges selects the winning team for the competition. This was a great show to watch with my future in-laws (father- and mother-in-law, as well as my fiance’s older brother and wife) because everyone enjoys music. We watched this at my fiance’s parents house on New Year’s Eve, and after the finale at midnight we went back home.

The New Year in Japan involves decorations (kadomatsu 門松 or gate pine), sending out New Year greeting cards (nengajou 年賀状), and giving the traditional New Year’s greeting (akemashite omedetou あけましておめでとう), but this year things were a little more subdued. As I mentioned before, my fiance’s close relative had passed away earlier in 2014, and tradition dictates that the New Year’s celebrations are more somber out of respect to the family member.

When we went back to my fiance’s parents’ house on New Year’s, our morning began with a slightly less elaborate New Year’s meal, and the less celebratory greeting of ohayou gozaimasu おはようございます. We were not supposed to greet each other or other people with the traditional greeting. My fiance’s mother kindly woke up early and made a New Year’s breakfast for all of us. The traditional foods are called osechi  お節, and there are a variety of dishes that make up osechi. Our osechi was more sparse than some of the more elaborate meals, but it was still delicious. 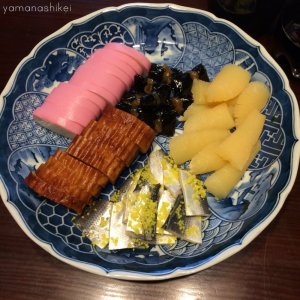 Kamaboko 蒲鉾 is broiled fish cake, and comes in red and white, which are celebratory New Years colors (remember the Red and White Song Battle?). It looks pink in my osechi photo.

Kazunoko 数の子 is salted herring roe marinated in seasoned dashi and the kanji characters literally mean “number” and “child” and apparently are a wish for many children in the New Year. I wonder if my fiance’s mother was hinting to him and his brother? It is the yellow pieces in my photo.

Datemaki 伊達巻 is sweet rolled omelette mixed with fish paste. This symbolizes a wish for many auspicious days. The datemaki looks brown in my photo.

We also had sliced fish and the rest of the beef that my fiance and I received as a wedding gift from his family friends to round out our osechi.

After eating osechi and spending some quality family time, we prepared for a visit to a Buddhist temple or otera お寺. If you know about New Year’s traditions in Japan, this might seem a little strange, because the typical visit is to a shrine or jinja 神社, which is associated with Shinto. However, our duty this year was to pay our respects to my fiance’s recently departed grandmother, as well as to introduce me and my fiance’s new sister-in-law to his departed relatives on his mother’s side.

This grave visit is called ohaka-mairi お墓参り. This is usually done twice a year by most families, and involves cleaning off the gravestones and offering flowers or other small gifts and a prayer to their ancestors. We filled up a bucket of water, and brought it over to the graves, and my fiance’s parents said a quick word about my future sister-in-law and myself. Then each of us took turns pouring the water over the headstones to clean them. We pressed our palms together, making sure not to clap as you would at a shrine, and bowed to show respect. When my turn came I also included a silent, brief prayer to the ancestors. When we were done we quietly headed out.

I was very honored to be introduced to Aki’s ancestors, because it meant that my future in-laws were very accepting of me. Overall, they were very kind and concerned with me, as well as going out of their way to introduce me to Japanese customs that I hadn’t experienced before. We had intended to do ohaka-mairi for his father’s family as well, but that was quite a bit father away, in another prefecture, and the snowfall up in the north was especially nasty. So, for safety’s sake, we decided not to chance the trip this year. The next time I return, we will have to include the second ohaka-mairi in the itinerary.

For dinner, we went back to the yakiniku (焼肉)restaurant that his parents took us to earlier in the trip. His parents go there often, so they always get very good treatment.

After delicious yakiniku, we went out to rent another movie at TSUTAYA. I also decided that I needed to fulfill my sweet tooth, and so I convinced my fiance to stop at a cafe to get an ice cream parfait. It’s not really a traditional osechi item, but I really think ice cream parfaits could be incorporated in my family’s New Year’s traditions!

I will admit that I was sad that the New Year had come, because it meant that my one-month trip to Japan was getting close to the end. I would also be returning to the US alone, because I still had a lot to do before my fiance could join me. However, I tried to enjoy myself in the moment, and to spend as much time as possible with Aki and my future in-laws.

What kind of traditional New Year’s food does your country have? What about the country that you live in? How do you spend your New Year’s each year? Let me know in the comments!