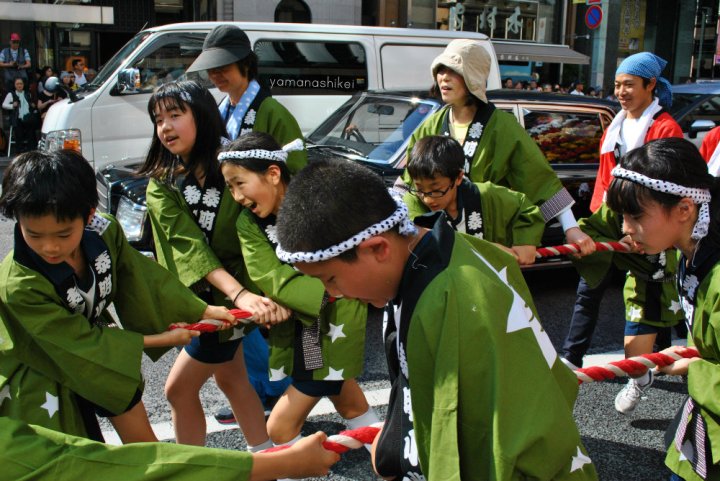 What expresses Fun better than children? These kids are pulling the mikoshi 神輿 (also 御輿), a portable shrine in which a deity is enshrined, at the 2016 Sanno Festival or Sannou Matsuri 山王祭 in Tokyo, Japan.

The Sanno Matsuri is a summer festival, held in mid June on even numbered years in Tokyo. The Kanda Matsuri is held on odd numbered years. This photo was taken during the grand procession, which begins at Hie Shrine 日枝神社, winds its way through Tokyo for nine hours, and then finally returns to Hie Shrine. There are several places to view the procession, and we caught it on June 10th in Ginza.

Watching the children, who had already been traveling around Tokyo in the hot sun for hours, give it their best as they escorted the mikoshi, and still having fun as they walked beside cars and waited at stoplights in the heat, I was quite impressed at their endurance. As people lined either side of the Ginza streets, we cheered them on in their efforts. Even the adults accompanying them seemed to be having fun!

What do you think of when you hear the theme of fun? Let me know in the comments!