How do you say “I love you” in Japanese?

The Google result for that exact phrase is:

While this is grammatically correct, culturally it’s not the most common way to convey the all-important feelings to your Japanese significant other. So how can you say “I love you” in Japanese?

Say I Love You in Japanese

When I was first starting to learn Japanese, I learned that “I like you” is 好きです suki desu, “I like you a lot” is 大好きです dai suki desu, and “I love you” is 愛しています ai shite imasu.

However, my Japanese boyfriends (one of whom is now my husband) never said 愛しています (ai shite imasu) to me. Usually, they said 好きだよ (suki da yo), and sometimes even 大好きだよ (dai suki da yo)  (♥ω♥ ) ~♪

As an American, it’s common even when you are in high school to exchange I-love-you’s with your boyfriend or girlfriend, and seeing it in movies and other media makes you sort of expect to hear it from someone you are dating. So to a young me, it seemed strange that Japanese guys didn’t use what I had always heard was the translation for “I love you.”

It Means I Love You in Japanese

If you study Japanese, you know that the language is all about beating around the bush, or being vague (曖昧 aimai). This is also true with verbal expressions of affection. As my Japanese improved I realized that pretty much no one says 愛しています (ai shite imasu) to express affection, even when they truly love someone.

While 好き (suki) means “like,” it also means “love.” When someone confesses to another person in anime or dramas, they say 好きです (suki desu), which doesn’t mean “I love you” because that’s a little fast, but it means “I like you.” As the relationship grows, it can evolve into love, but that transition is never explicitly discussed. But when I ask Japanese guys, 好き still means love to them.

Culturally, direct expressions are not entirely common, so it can be uncomfortable for Japanese guys to express their emotions in such a direct manner. Even American guys have problems expressing emotion, so you can’t really blame Japanese guys.

How to Say I Love You in Japanese

It is said that in Japanese, “I like you” 好きです (suki desu) and “thank you” ありがとう (arigatou) mean “love” (愛 ai). In a language where you don’t often directly express such strong emotions, this means that it’s not the direct meaning of the words that is important, as much as the feelings behind the words.

In Japanese households, parents and children don’t often exchange sentiments such as love verbally or even with hugs or kisses. Rather, they express their feelings through what they do to care for and support each other. Thus, expressing thanks is a way of noticing how someone cares for you and expressing your appreciation. And doing similarly kind things for the other person is a good way to express your own feelings of love.

In romantic relationships, this same nonverbal communication can almost be more important than simply saying 好き (suki). So don’t get worried when your Japanese boyfriend doesn’t say 愛しています (ai shite imasu) – it doesn’t mean he doesn’t love you! Look at his actions, and it should be obvious how he feels. If you still want to hear it? Ask! It might be awkward at first, but it provides a chance for multi-cultural learning for both of you. If you need verbal confirmation, like a lot of American women do, usually Japanese guys will make an effort once they know how important it is to you. 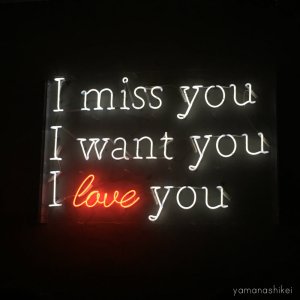 So go ahead, and say “I really like you” – 大好きだよ (dai suki da yo) – or even “thanks for everything you do” – いつもありがとう (itsumo arigatou) – and rest assured that your “I love you” will be conveyed.

How do you say “I love you” in your language? What has someone done for you that you realized they loved you? Let me know in the comments!

One thought on “Love in Japanese”